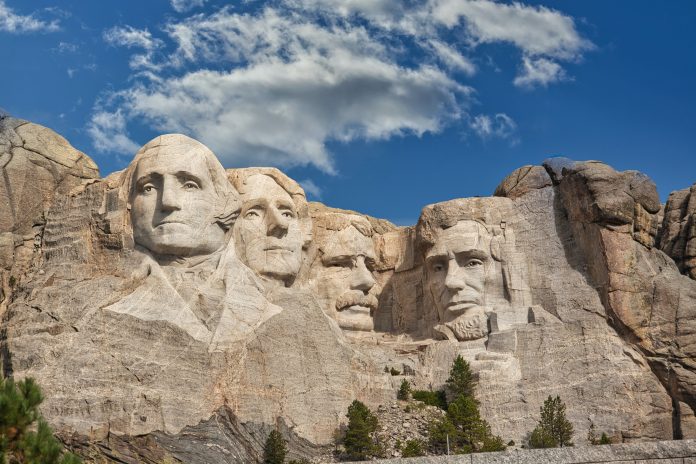 NICKNAME South Dakota is called “The Mount Rushmore State.” The nickname comes from the world-famous mountain carving of four U.S. presidents in the Black Hills.

FLAG The South Dakota flag features the state seal surrounded by a blazing sun in a field of sky blue. “South Dakota, The Mount Rushmore State” is arranged in a circle around the sun.

CAPITAL Pierre serves as South Dakota’s seat of government. The capitol, which was built in 1910, is one of the most fully-restored capitols in the United States.

DESSERT The fruit- or cheese-filled yeast-raised cake known as kuchen is usually served for breakfast, but it is also enjoyed as a dessert. The word kaffeekuchen is German for “coffee cake.”

NOSH The state’s official nosh is chislic. These seasoned cubed chunks of fried or grilled meat are usually made of beef or mutton.

Rodeo traces its roots to the Old West when cowboys gathered after a cattle roundup and celebrated with informal competitions showing off their horsemanship and roping skills.

Black Hills gold jewelry is created exclusively in the Black Hills of South Dakota. Each design incorporates a motif of grapes and leaves in tri-color combinations of green, rose and yellow gold.

FISH The state fish – walleye – is the most sought-after game fish in South Dakota. Walleye populate all four Missouri River reservoirs and many of South Dakota’s glacial lakes.

BIRD The Chinese ring-necked pheasant was introduced successfully into South Dakota in 1908. The male has a long pointed tail, colorful plumage and a white band around its neck.

ANIMAL The adaptable coyote hunts small game and rodents across the state. Coyotes are found in greatest numbers along the Missouri River, its tributaries and in the Black Hills.

INSECT South Dakota is a leader in honey production. The honey bee (Apis Mellifera L.) was adopted as the state insect in 1978.

FLOWER The pasque, a small lavender flower, is a member of the buttercup family. It grows wild throughout the state, and its blooming is one of the first signs of spring in South Dakota.

TREE The Black Hills spruce is a member of the evergreen family. The pyramid- shaped tree is characterized by foliage of short blue-green needles and slender cones.

SOIL Houdek is a deep, well-drained and loamy soil. Farmers use it for growing crops and for rangeland.

MINERAL Rose quartz, mined in the southern Black Hills, was first discovered near Custer in the late 1880s. The pink- colored quartz is used primarily for ornaments and jewelry.

GEMSTONE The Fairburn agate is a semiprecious stone, first discovered near Fairburn, S.D. The brightly banded gem is used in jewelry and is a favorite of rock collectors.

FOSSIL The triceratops was a horned dinosaur of the late Cretaceous period (approximately 68 million years ago). It was a herbivore and used its horns for defense.

The Great 8 in South Dakota

The Great 8 are the places that put South Dakota on the map. They’re monumental, surreal, infamous, sacred, beautiful and relaxing. Check them off your “must-see” list as you travel through the land of Great Faces and Great Places.

This striking landscape boasts a maze of buttes, canyons, pinnacles and spires. Wildlife abounds in the park’s 244,000 acres.

The first cave to ever be designated a National Park features 149 miles of explored passages under a national grassland where bison roam. It is one of the longest caves in the world.

North to south, this band of shimmering water cuts the prairie in two and provides some of the best water recreation around.

Spectacular views can be experienced both above and below ground at this national monument that’s home to the third-longest cave in the world.

Follow in the footsteps of legends and explore this Wild West town as it buzzes with entertainment including festivals, concerts, historic sites, re-enactments and gaming.

This memorial honoring Native American people depicts legendary leader Crazy Horse. It will be the largest mountain carving in the world when finished.

Home to 1,300 free-roaming bison and other wildlife, this 71,000-acre park features the Wildlife Loop Scenic Byway and many great outdoor adventure opportunities.

In general, here’s what you can expect from South Dakota’s four seasons:

SPRING Mostly sunny days, but this can be the rainy season. Spring snow showers are a possibility through early May.

Biking is allowed on interstate highways. Though helmets are not required, their use is strongly recommended. As you prepare for longer rides, keep in mind that our state is famous for wide open spaces, so be prepared for empty stretches between towns.

Motorcycle enthusiasts under the age of 18 are required to wear a helmet. Using a helmet is strongly recommended for everyone, but eye protection is mandatory. All motorcycles must have at least one headlight and taillight. OHV/ATV trails are growing in popularity, especially in the Black Hills National Forest.

South Dakota’s diverse landscapes, monuments, parks, natural wonders and open skies make it the perfect place for a road trip. Life’s about the journey here, so take the scenic route to make some unforgettable memories.

This byway leads you over pigtail bridges and through six rock tunnels among towering granite pinnacles and around pine-clad mountains. It includes Custer State Park and Mount Rushmore National Memorial and follows Highways 16A (Iron Mountain Road, E-6), 244 and 87 (Needles Highway, E-6) in the Black Hills. Note: This route includes sharp curves and tunnels with height and width restrictions. Tunnel sizes can be found under the Steep Grades & Tunnels information in this publication.

“Oyate,” in the Dakota/Lakota language, means “a people” or “nation.” Travelers of this trail will enjoy a wide variety of geography, from farmland and prairies to the Badlands and the foothills of the Black Hills. This 388-mile highway turns off Interstate 29 at Vermillion (H-17) and heads west on Highways 50 and 18 to Edgemont, near the Wyoming border (F-5).

South Dakota’s cultural roots unfold as you follow the Missouri River through the lands of five Native American tribes. The route follows Highway 37 at Running Water (H-15) north to Highway 1806 near Kenel (A-11) in the north-central part of the state. The route is highlighted in purple on the map.

Tour through the middle of 244,000 acres of sharply eroded buttes, pinnacles and beautiful spires, all blended with the largest protected mixed-grass prairie in the United States. The byway, located along Highway 240 (E-8), follows the natural contours of the land, weaving in and out of the native grasslands. Travelers have 14 designated overlooks at which to stop and appreciate unique views.

Located along Highway 14A (D-5), towering limestone cliffs edge this route as it winds through breathtaking Spearfish Canyon. Travelers will see ponderosa pine, spruce, and aspen trees covering hillsides, wildlife and waterfalls along this stretch of beautiful byway.

Home to numerous state and national parks, travelers to this western region can explore the unique landscape of Badlands National Park, stand in awe of Mount Rushmore National Memorial and Crazy Horse Memorial, and walk in the footsteps of Old West characters in Historic Deadwood. Visitors find numerous things to do and places to see in this diverse geographic area.

Thousands of years ago, the northeastern region was covered by glaciers; now it features some of and relaxation. Travelers can learn the history of early Native American inhabitants, discover the way of life of frontier soldiers and pioneering homesteaders, and enjoy some of the nation’s best pheasant hunting.

Surrounded by Missouri River bluffs, open prairies, and friendly communities, this region is full of variety. From fishing and boating on the Missouri River to camping and hiking along the river’s banks, this central region is an outdoor enthusiast’s dream. Visitors discover the state’s past in the capital city of Pierre, and experience the Native American culture of the five tribes located here. 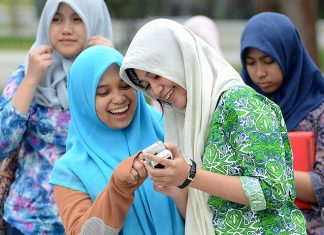 October 9, 2020
Indonesia is one of the countries that use mobile networks heavily, and perhaps this is the reason for the boom in applications...

Basrah, the City of History and the Ballad of Poets, the...

Top 8 Islands for Honeymooners in the Maldives

Near the National Mall, Washington DC