Heritage souvenirs and gifts buying became a norm in every touristic trip. They represent the civilization of the country we’re visiting and visualize its main customs and traditions’ characteristics, as they had been made by the hands of the skilled artisans in the local industries. They are collectibles that document the trip’s details and memories, keeping its aroma alive in every moment. For that reason, traditional handcrafts became a vital part of tourism attraction, where festivals and private markets join to promote tourism, culture and heritage in that country.

Souq Al-Safafeer: The Tourists’ Destination and One of the Oldest Bazaars of Baghdad

This is one of Baghdad’s famous ancient bazaars and its history dates back to the Era of the Abbasid Caliphate. Its title consists of two names; first is “al-safar”, which is copper in Arabic, and the other is “al-saffar”, meaning coppersmith. Hence the name “Al-Safarain”, or “Al-Safafeer” for plural in the Iraqi language. Al-Safafeer bazaar’s construction coincided with that of Al-Muntasareya school in the year 631 AH, during the Abbasid Caliphate’s period, to act as a workshop that provides the school’s kitchen needs from large pots to plates, spoons and various other utensils. Lt in S. The bazaar is located on the right side of Al-Rasheed Street, one of the capital’s most famous and early streets. Souq Al-Safarain’s entrance begins from an area called “Mahallat Bab Al-Agha”, and it extends to meet another famous bazaar, “Al-Bazazeen Souq”. This bazaar is considered a part of Al-Safafeer, which is one of Al-Rusafa district’s famous shops.

Souq Al-Safafeer, the place where red copper is shaped with professional hands to souvenirs of kitchen utensils, teapots, and lanterns, decorated with engravings, has historic stories that turned it to a touristic landmark having its value in Baghdad. Artefacts-making in it became a local and civilization heritage for a profession that is considered one of the most difficult and accurate handworks, which requires patience and a long time to get the work complete. create those fine-looking heritage One of Al-Safafeer’s stories is that during Al-Montaser Bellah Abbasid Era, horses passed through the bazaar to be trained on the noise resulting from metal roads, so it does not get frightened by the loud noise. Another story also tells that the rhythms Al- Khalil Bin Ahmed Al-Farhadi frequently visited the bazaar and listen to the hammer beats, that helped his in rhythms.

Wonderful Products that will Leave You Astonished

Al-Safafeer workers divide their job in the bazaar according to the stages of production. There are some who carve the copper using hammers or nails, and they are mostly adolescents. The rest specialize in the motifs and shapes decorations that will be inscribed on copper sheets, while others will work on refining the product after embellishing it, and polishing or coloring the carved sheets to add a touch of beauty on the shapes made. Some will also stud them with semi-precious stones or paint it with enamel. Al-Safafeer’s visitor will find numerous types of antiques, the Lion of Babylon, the Hanging Gardens and the Great Mosque of Samarra, where they are displayed in the shops, despite their small space. It leaves everyone who enters and watches its products stunned, and it invites you to gaze at its beautiful carvings and drawings, forcing you to possess it without giving you a chance to negotiate the price!! Souq Al-Safarain (Al-Safafeer) does not have a record of visits and events that reserves its charm and long history. Instead, it has a strong visible memory that qualifies it to list the facts with precision and details, as if it is an open book for every tourist or visitor of this heritage landmark in Baghdad. 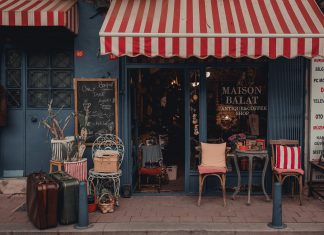 April 16, 2022
The history of the Balat area in Istanbul dates back to the era of the Ottoman Sultan “Bayezid II”, where he received...

8 Fun Activates for all Seasons in Vermont

Passage Markiz… The Best Part of a Dream in Istanbul