TarvellerDaily
الرئيسية Travel To Asia Sharjah… The Cite of Culture

Its name is derived from the “rising sun’, where Sharjah (or “Al-Shareqa” in Arabic) means “the rising”. Sharjah, the emirate of the sun, culture, history, and art, had always been known for its distinctive authentic Arabian character that fills its visitors’ heart with delight.

Sharjah’s occupies an area of 2,600 square kilometers, which is equivalent to one-third of the UAE’s total area, excluding the islands.

Obtaining the title “Capital of Arab Tourism” is based on a number of criteria developed by the Arab Ministerial Council on Tourism. The most important of these criteria is the rate of tourist exchange between the winning destination and the rest of the Arab countries, the ease of accessing the city, the tourism opportunities available in it, its status within the archaeological sites and the infrastructure it owns, the development and investment in tourism services, hotel occupancy, as well as organizing and licensing the hotel sector in a manner that is consistent with the highest international standards.

Sharjah is attractive destination an in ways. It provides many many opportunities and positive motivations businessmen for that encourages investment in the emirate. Sharjah is also committed to providing all forms of support to improve the industrial sector, and to maintain the rapid economic growth of the emirate. In addition to all that, Sharjah offers advanced infrastructure and a modern network of roads and ports, along with its international airport which is comparable to the finest airports in the world, serving more than 8 million travelers a year.

In the field of tourism and leisure, Sharjah has succeeded in developing many of the touristic facilities and activities, where the golden sun and the wide sandy beaches of the emirate, as well as canoeing amid mangrove trees, driving on the high mountains, and the pleasure of sailing boats trips on the turquoise water that circles the Sharjah center.

The heart of Sharjah

A major touristic project the emirate has worked on to accomplish this year. It includes a range of museums, hotels, and shopping, archaeological and residential centers.

The emirate contains more than 20 museums, where the most notable are Al Mahatta Museum, Sharjah Museum of Islamic Civilization, Bait-Al- Naboodah and others.

Sharjah Fort was built in 1820 and is located in the center of the city. It is a two-story building reflecting the ancient Arab architecture. Sharjah Fort has been converted to a heritage year 1996, offering its visitors detailed information on the fort. The museum also has a range of collectibles, documents and pictures of the emirate’s history.

This old market, or souq, with its alleys and adjacent shops, embodies the true picture of the early trade activity, displaying the heritage goods and collectibles for its tourists, and other samples of traditional products such as pottery, the traditional textile and embroidery craft, and the making of daggers and silver cutlery. Perfume and incense are an integral part of the goods that tourists find in the Old Souq.

The emirate has been crowned Capital of Islamic Culture for the year 2014, which took place in the Organization of Islamic Cooperation conference in Baku, capital of Azerbaijan. Tourists can get to know the beautiful aspects of the Arabic and Islamic lifestyle by visiting Sharjah museums, the traditional markets, heritage sites and mosques that decorates the emirate with its luxurious architecture.

More to see in sharjah 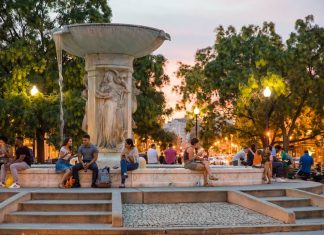 October 14, 2020
Share your memorable moments in the District as you navigate DC's vibrant neighborhoods, take in its outstanding performing arts scene and indulge...

13 Suggested Things to Do in Beirut