It is the third largest city in Lebanon, and one of the oldest cities in history. It deserved the title of the oldest city in the world, and one of the most important Arab cities. It has enough heritage to be like a crowned queen on the throne of history. It has its own special elegance regarding Urban design and architecture. Its buildings are in attractive harmony making up an aesthetical scene.

It is the capital of southern Lebanon, and its unique position makes it the main link between the south and Beirut, which is 45 kilometers southwest.

Monuments and treasures in Saida

It is full of ancient monuments, including, but not limited, Sea Castle built by the Crusaders in 1228 at the entrance to the city on a rocky island.

There is also Debbane Palace, which dates back to the Great Prince Fakhr Al Din II, in the early seventeenth century. There are also several famous places such as Wild Castle “St. Louis”, Khan Franj, Great Omari Mosque, Rome Church, Khan Al Shakria, Sabaa Banat Bathroom, Latin Church, and the shrine of the Prophet Sidon, grandson of Noah, Shrine of Sharhabeel Ibn Hasna, Shrine of Prophet Yahya, Shrine Mar Elias and a lot of sights that make it a unique destination for tourists.

Archaeological excavations in Saida revealed many important pieces that date back to 3000 BC. Excavations also showed the presence of ground layers dating back to Islamic and Roman Eras.

Patisserie Kanaan is a restaurant specialized in preparing the famous Lebanese desserts. It’s characterized by its wonderful location on the Mediterranean coast.

Rest House offers Lebanese cuisine, seafood, and barbecue. It has a unique location and also serves wide variety of drinks. Zawat is the name of a restaurant that lies on the roof of an old building providing seafood and fresh fish every day. Fish House is characterized by picturesque scenery and serves fresh fish.

It’s easy to reach the city of Saida due to the availability of transportation means. The city of Saida offers special and well-organized tours with a tour guide who tells tourists everything about all historic and entertaining places located in the city.

Saida is the city of civilizations, which flourished along the sea coast, and turned it into a first-class commercial and tourist destination. 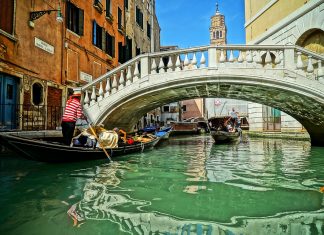 Venice… The Legend of Attraction