Antalya is considered as the capital of Mediterranean. It offers plenty of tour options and traces from Lykia, Pamphylia and Pisidia, which are the three ancient culture regions of the city. On the other hand, Kaleiçi is considered as the historical center of Antalya. It is an archeological and urban protected area. A large part of Kaleiçi was internally and externally surrounded with ramparts since ancient terms. Aligned alongside narrow streets, houses reflect both architecture and culture of the city.

Located in Antalya Gulf, this small marina was one of the important doors of Anatolia to Mediterranean since ancient times. Today, the marine hosts fishers and local tour vessels. It is also the entertainment center of the city.

Being the symbol of Antalya, Grooved Minaret was built at the term of Anatolia Seljuk Sultan Alaeddin Keykubat (1219-1236). It was made from cut stone, while its body was made from turquoise porcelain. The minaret is reached with 90 stairs. Yet, visitors are not allowed to climb the minaret.

Located on the west of Grooved Minaret, the building is considered as the most beautiful examples of multi-dome mosque type. Zincirkıran Tomb and Nigar Hatun Tomb is located on the north of the Grooved Mosque. While the lodge which was used by Mevlevi dervishes is today used as fine arts gallery.

Cut Minaret is one of the buildings which glamourizes Antalya photographs. Wooden part of Mosque minaret was demolished because of a fire in 19th century. Since then, it is called as ‘Cut Minaret’.

Being one of the strongest emperors of Roma Empire, Hadrianus visited Atttaleia during his small Asia tour. Hadrianus gate was built in his honor. Located in Üç Kapılar site, the structure allows access to the castle from city ramparts.

It was built in memory of 25th anniversary of coming to the throne of II. Abdülhamit on the north bastion of demolished external castle of the city. Height of the tower is 14 meters and clock of the tower was given as gift by German Emperor II. Wilhelm.

Serving as a culture center as well, religious ceremonies are conducted in the church on Sundays, Tuesdays, Wednesdays and Thursdays.

It is located at a point which views Antalya Gulf from the top. Scene of cliffs are worth-seeing. Round mausoleum of 14 mt. Height dates back to Roma term.

Properties of the Turkish Republic’s founder Atatürk are displayed. Money and stamp collection is also available.

One of the five known Greek Orthodox churches in Kaleiçi. The modest church has a rectangular nave with vault and reflects the general characteristics of Mediterranean architecture. The vaulted ceiling, symbolizing Paradise, is decorated in shades of blue and plaster motifs.

With its small streams it flows over cliffs passing through Antalya and eventually runs into the deep blue of the mediterranean sea. The largest of these falls, Düden Waterfalls extends as far as the sea in Lara and falls from 50m.

Side…Out of the City Center

Side was the most important port of Pamphylia region in the ancient period. Located on the seashore in the end of ancient city, Apollon Temple is the symbol of Antalya with its body comprised of columns arranged in Korinth order. Side is 75 km east far from the city center of Antalya.

Aspendos…Out of the City Center

Being among the symbols of Antalya, Aspendos Theatre is one of the best protected ancient theatres of Anatolia. Built in 2. Century A.D, stage building of the theatre is standing until almost its original height. Spectacular aqueducts, of which ruins are still available today, were bringing water to the city from mountains in the north. Aspendos is 48 km. east far from the city center of Antalya.

Perge…Out of the City Center

Located at a distance of 18 kilometers to the city center of Antalya, Perge ancient city is in the district of Aksu. Being an important Pamphylia city for being located on Kilikia-Pisidia trade route, Perge city was one of the most organized Rome cities of Anatolia, which was famous for its architecture and sculpture.

More to see in Antalya 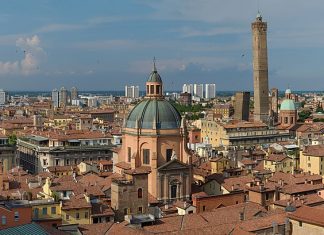 March 21, 2020
Never been to Italy and the city of coffee Bologna? Try strolling in Zanarini, a posh bar in the histrionic center of Bologna. A...

Tips for a Healthier & Happier Flight