For centuries, they have been witnessing cultural and political debates. They are the coffee shops of Baghdad, the stations of literature and haven of poets and intellectuals.

You find them in all streets and alleys. A place to unwind and taste different coffees and teas. The place where Ideas and visions are exchanged between its visitors of intellectuals and the public, who are accustomed to arranging seminars and dialogues in these coffee shops, which its traditions and rituals are still alive since ages.

Historically, Baghdad, and its neighborhoods of Karkh and Rusafa in particular, is famous with its scientific, cultural and professional forums that was supervised and organized by dozens of scientists, authors, intellectuals and dignitaries with a common desire to exchange views and experiences, as well as their love of literature. The term “coffee shop”, which is called “Maqha” in Arabic, originates from these forums, as coffee was always served right away.

Historical sources indicate that the first coffee shop opened in Baghdad was in 1586 AD, in the reign of the Ottoman Governor Jafalla Zadah Sinan Pasha, at Khan al-Kamrak, near Mustansiriya Madrasah, and its door was open on the road leading to Souq al-Khafafin.

Coffee shops in Baghdad are often seen as a resort for intellectuals, and that it is open for all segments of the society. Throughout the years, these cafes have become places of interest to men of literature, politicians, artists, and even school students and universities of all ages and levels of intellect and social status, with one goal bringing them together, the goal to preserve the ancient cultural heritage of the Iraqi and Baghdadi society.

Here is where some  coffee shops had been associated with names of literary, artistic and politically prominent names such as “Farid al-Atrash” café, “Umm Kulthum”, “Zahawi”, “Arif Agha”, “Hassan Ajami”, “Shahbandar”, “Parliament” and other traditional cafes that were truly halls of intellect, literature and politics.

Shahbandar is one of the literary cafes that was founded in 1920 on the ruins of Shahbandar Press, which was closed due to political issues.

Shahbandar café was known for being frequented daily by three different categories of the Iraqi society, coming in the form of three meals. The first meal was of ministers and parliamentarians who visited the cafe in the morning. The second meal, which begins at noon, is of lawyers and judges, as the cafe is located near the courts area. While in the evening, the famous Iraqi genre “Maqam” would perform in the cafe where it is attended by artists, authors and fans of the authentic Iraqi Maqam. 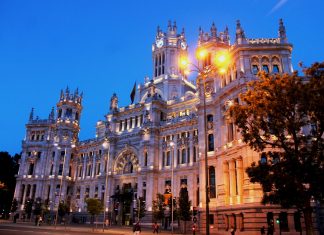 March 15, 2020
Spain is one of the best tourist destinations in the world because it witnessed several civilizations as well as it had and even today...