TarvellerDaily
الرئيسية Travel To Asia Basrah, the City of History and the Ballad of Poets, the Palms...

It is the wonder city, the ballad of poets and lovers, and the city of “shanasheel”, the palms and rivers. It was named as “Basrah” as it is a soft rock close to paleness “for it viscous mud” and the red clay land.

Basrah is located on the banks of Shatt al-Arab, which starts at the two rivers forum, Tigris and Euphrates, and flows for approximately 602 kilometers to reach the AlI-Faw, a peninsula’s small port in Iraq, to pour later on the Arabian Gulf.

A city dancing on the hiss of the palms’ fronds, with Shatt al-Arab initiating the tune of dreams, and the stir of the swaying tide in the reverie, where the sea gulls and ducks, and the nightingales are. It is the city of Al Asama’i, Al Hassan Al Basari, Al Jahidh and Abu Nawas, and the center of intellectual and philosophical movements, such as ‘Al Mo’tazila’ (The Retreats), ‘Ekhwan Al Safa’ (Brothers of Safa), ‘Al Qadariya (The Fatal), Al Ismailia and other… The city of Basrah had been known as the city of fraternity, religious and spiritual forgiveness, and the Christians remained to make up the vast majority among the religious communities in Basrah, and dozens of monasteries and churches had been constructed, as well as the temples of the Jews and Sabians. The most important monasteries and churches in Basrah are The Chaldean Mar Thoma Church, The Syrian Catholic Church, Church of the East, Latin Church, Holy Family Church, Saint Ephrem Church, Armenian Orthodox Church of the Virgin Mary, Sabbatarian Church and the Evangelical Church.

Nature of the Basrah Person

Forgiving, generous caterer, good conscience, a lover of literature and art and has three seasons he manifests in, and they are:

It is the carnival of glee that lasts for a month, beginning in the late February until the end of March, where hundreds of Basrah families and young people multitude to enjoy the warm weather in the tamarisks of Alburjuseya and Alnajmi, which is swarming with folklore bands, dances and joy, and eat and drink between the leafy tamarisk trees.

In early April, the sky becomes covered with light clouds, and for Basrah people these are heralds for the “Soboor concourse” that crowds by millions to Shatt al-Arab to lay its eggs. At that moment, this delicious fish becomes the daily meal for all social classes, and Basrah gets occupied by the smell of spices, tamarind, and the grilled “soboor”!

Opened on 25th of March, 1938, to connect Basrah with Europe, India and Southeast Asia, and was the first airport to be built in the region. As well as the launching of Shatt Al Arab Hotel as a supplement to the airport, and was of a Swiss management. The hotel witnessed the hosting of the most famous international celebrities, such as the novelist Agatha Christie and her husband Max Mallowan, as well as the international pilot Lindbergh and Kosygin, and others.

Ripe Dates Harvest Season “Al-Kesas”, or “the Pluck Off”

In early June, Shatt al-Arab gets packed with ships and boats, of which ships ripe date harvest to big ships across the Gulf Sea. The “jaradeeg”, which are the special dates’ stores, then starts their role in organizing the sales and date trading, and exporting it to the world’s markets.
“Al-Kesas” season diffuses a general local participation campaign amongst the people of Basrah, from executives, students and labors, in all Abu Alkhaseeb villages, to and assist in date harvesting and categorizing. The most famous dates of Basrah are Al-barhi, Al-bareem, Al contribute sayer and Al-kantar.

Formerly entitled the Island of Coal, and the Directorate of Ports owned it and turned it into a beautiful touristic island, where a bridge links it with Shatt Al Arab Hotel that opened in the days of the Second World War for military supply purposes.

The Wali Ayas Basha built ‘The Palace’ Building in Basrah in 1546, and a place from Abdul Salam AI- Munaser’s house was taken to reside in, therefore was called the House of the Wali, and it falls on the bank of the river ‘Muddah’ where a wooden bridge links it with the rest of the houses and the area surrounding it. The ‘Mahalla’ is also attached with bridges and wooden Mahalla Al Basha arches that links between the notables’ palaces in it, and the most recognized of those archways are: Yameen Arch arch, Al-Manaseer arch, Talaat arch, Almendeel arch, Alnema arch, Alhendi arch, Abdulsayed arch, and many more arches er house still remains with its multiple halls, its corridors, pillars, its shanasheel and decorations, illustrating a model of the The of Basrah people in that period.
Iraq’s Ministry of Culture possessed the Wali House, and a number of other monumental houses such as the house of s ‘Khazaal Khan’, the ‘Muhammara’ prince, and the Greek council’s house, Abdullatif Almendil Pasha house, Abdullatif Aar Gaafar house, and the house of Hashem Alnaqeeb and Mohammed Saeed Alnaqeeb. These houses had been transforna into the Palace of Culture, a headquarter for the union of Basrah writers, the association of Iraqi fine artists, and The Cultur House in Basrah.

The Indians Market is considered one of the oldest markets of Basrah, and had been constructed after the opening of ‘Mahallat Al Maqam’ year 1867 during the reforms campaign that the Wali ‘Medhat’ Pasha carried out. Some historians believe that the market had been established after the English campaign against Iraq and its troop entry to Basrah year 1914, and by colonies soldiers whom England had abandoned to return them to their home countries, where the majority of them are Indians, Chinese, and other East Asian people. The Indian market to the people of Basrah, or Basrah visitors, has a special status for it being a forum to all nationalities coming to Basrah port, and as it contains many various and bizarre goods that arrives from different parts of the world. ‘Indians markets’ is one of the landmarks we recommend to visit for all those who stopover in Basrah!!

The Abbasid Library in Basrah

History books state that the descendants of Prince ‘Hashim Bin Al-Mostaqdi Bellah Alabbasi’, Successor 33, and the greatest grandfather for the ‘Aayan Pasha’ family. whom are one of Basrah’s eminent families were the first to establish the Abbasid Library, which dates back to the age of 1200 AD, or the Sixth century.

The library is located in Aayan Pasha’s house, which is placed in the corridors of ‘Mahallat Al-Safa’ (Gold market), and contains 4000 manuscripts and about 40,000 historical books, in addition to the presence of ten registers dedicated for recording the views of the international senior intellectual figures that visited the library.

In the year 1977, the papyrus boat “Tikers” sailed from AI Qurnah, where the memorial remnant of Adam’s tree is, and was led by the Norwegian scientist ‘Thor Heyerdahl’, heading to the Indian ocean towards Bombay port, and that was to prove his theory that the ancient Iraqis have reached India and the African ports by boats made of papyrus reeds.

Nothing was left for Basrah, “the city of Sinbad”, in the modern or far history, but several stories, as there is the legend of the “great love” that legendary Ottoman Wali “Nazem Pasha’ had from lady ‘Sara Khatoon’, and the palace of Sir ‘Hashem Bek AI- Naqeeb’, that Prince ‘Faisal Bin El-Hussein’ resided in before taking over the throne of Iraq in the year 1921, and various stories about ancient places and tombstones that days still narrates, and novels of writers and historians that we will tell in another topic about the city of knowledge, history, palms and shores…Basrah, Iraq’s eye on the world. 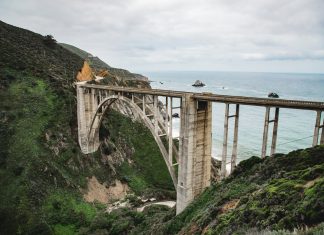 July 16, 2020
Big Sur, California is one of the world’s most unforgettable stretches of coastline—and for good reason. The scenery is unmatched, and an...