This mountain carving features the 60-foot faces of four great American presidents: George Washington, Thomas Jefferson, Theodore Roosevelt and Abraham Lincoln. Work on the sculpture began in 1927, when sculptor Gutzon Borglum was 60. Work ended shortly after his death in 1941. His son, Lincoln, put the finishing touches on the project. The Lincoln Borglum Visitor Center and Museum has several interactive displays, along with more than 400 artifacts and 300 photographs. The Presidential Trail, which is about a half-mile walk and loops along the base of the mountain, offers a spectacular close-up view of the faces.

Specifics: The grounds, information center and museum are open daily, year-round. During the summer season, the National Park Service conducts interpretive programs each day. Also during the summer, the Sculptor’s Studio is open daily and a high-tech lighting ceremony is held nightly at the memorial amphitheater at dusk. A concession-operated dining room and gift shops are also open year-round.

Admission is free; however, there is a parking fee.

Stretching more than 100 miles through South Dakota’s Black Hills, the Mickelson Trail is open to hikers, bikers, horseback riders and cross-country skiers. The Mickelson Trail surface varies from crushed limestone to gravel and meanders among stunning forest scenery. The trail was built along a former railroad corridor, so its nearly level grade makes it an ideal outing for users of all ages and abilities.

There is a User Service Fee required, except in the city limits at Deadwood, Lead, Rochford, Hill City, Custer and Prìngle.

Specifics: Badlands National Park is open year- round. Lodging, food and souvenirs are available April to mid-October at the Cedar Pass concession.

Remember fallout shelters, Sputnik and the missile gap? Remember duck-and-cover drills, the Iron Curtain, the Red Scare and first-strike capability? The deadly drama underlying the Cold War is relived at the Minuteman Missile National Historic Site near Wall where visitors can see how the end of the world could have begun. The site is the first national park in the world dedicated to commemorating the events of the Cold War. Delta Nine, an underground concrete silo on the edge of Badlands National Park, held a Minuteman II missile that could send a nuclear weapon to the Soviet Union in 30 minutes.

There is no admission fee.

There are few truly wild places left in this country. Custer State Park is one of them. Nearly 1,300 magnificent bison wander the park’s 71,000 acres, which they share with swift pronghorn, shy elk, sure-footed mountain goats and a band of curious burros. Slender granite formations nicknamed the Needles dominate the skyline, and grassy meadows fill the valleys. Amidst pure nature, you’re free to explore via trail rides, scenic drives, mountain bikes, paddle-boats, hay rides and safari tours. Five lodges in the park provide beautiful accommodations for a great night’s sleep.

West of Custer is an underground wonderland far removed from the forests and mountains above, but still an integral part of the Black Hills. This is the maze of Jewel Cave, the third-longest cave system in the world, with more than 168 miles of mapped and surveyed passages. Jewel Cave takes its name from the glittering calcite crystals that line its walls.

No park entrance fee is required, but there is a charge for cave tours.

“Paha Sapa” the Lakota call them, “hills that are black,” because their pine-covered slopes look as dark as shadows from afar. The forest is made up of 1.2 million acres of meadows and tree-covered mountains. At 7,242 feet above sea level, Harney Peak is the highest peak in the United States east of the Rocky Mountains. The forest has more than 353 miles for hiking, biking, horseback riding, cross-country skiing and snowmobiling. Deer, elk, pronghorn, bighorn sheep and mountain goats roam freely through the forest.

Admission to the forest is free. There is a fee for camping and some day-use sites.

One of the nation’s oldest national parks, Wind Cave became part of the park system in 1903. The park began with the cave and some surface land, expanding in later years to the present 28,295 acres above ground. Today, Wind Cave National Park actually houses two worlds: the terrain and wildlife of the surface and the hidden labyrinth beneath the surface. The cave system is one of the longest in the world, at 141 miles of explored passages that include rare and unusual boxwork, frostwork and popcorn formations.

No park entrance fee is required, but there is a charge for cave tours and camping sites.

Fort Sisseton serves as a colorful reminder of South Dakota’s frontier history. Situated on the rolling prairie hills of northeastern South Dakota, the military outpost, originally known as Fort Wadsworth, was established in 1864 after the nearby Dakota Conflict in western Minnesota. The outpost became known as Fort Sisseton, named for a nearby tribe of Native Americans. Today, it is recognized as one of the nation’s best preserved frontier forts. The fort, including all 14 intact buildings, is listed on the National Register of Historic Places and now serves as a scenic State Park.

Sica Hollow (pronounced she-cha) was so named by its first Native American visitors hundreds of years ago. The park is heavily wooded and full of legends and lore, which add to its appeal. Along the Trail of the Spirits, visitors will see gurgling reddish bogs among the streams, rustic bridges, waterfalls and wildflowers. Autumn is a particularly beautiful time in the park.

Named after the falls of the Big Sioux River, Sioux Falls is South Dakota’s largest city. Falls Park showcases the city’s namesake with a visitor information center, five-story observation tower and hydroelectric plant-turned-café, as well as several walking trails and an art gallery. The park, which displays beautiful pink granite outcroppings throughout, is the former site of the Queen Bee Flour Mill, which was originally a seven-story building constructed in 1881 by R.F. Pettigrew. The mill was never successful and the building was used for a wide variety of things over the years. In 1956, a fire destroyed the building.

Specifics: Falls Park is open daily, year-round. From mid-November to mid-January, the Falls are illuminated nightly during the holiday season.

There is no admission fee charged.

Situated on the banks of the Missouri River, this park is one of the most popular in the state park system. With 417 shaded campsites, 17 cabins, sandy beaches, hiking trails, beautiful chalkstone bluffs and a modern marina along Lewis & Clark Lake, visitors will find a variety of opportunities to enjoy the outdoors.

Created by glaciers thousands of years ago, this state park’s geographic features include rolling hills and forests perfect for outdoor adventure. Visitors can enjoy camping, swimming, boating, fishing, hiking and horseback riding. The area also plays host to more than 200 species of birds, and other wildlife such as white-tailed deer, wild turkeys, rabbits, and fox.

Specifics: Newton Hills State Park is open daily, year-round. Events such as the Sioux River Folk Festival and nature and recreational programs are held throughout the year, A state park entrance fee is required.

This park is located in one of the most unique areas in South Dakota. Sioux quartzite formations surround Split Rock Creek, which flows through the park and has been cutting deep gorges through the area for millions of years. The creek and the quartzite creations are a playground for hikers, photographers and rock climbers.

The Missouri River served as part of the trail Meriwether Lewis and William Clark took as they explored the new territory, making Lewis and Clark history a vital part of the communities that lire the river. In addition, visitors to the river take advantage of hiking, biking and camping, as well as water activities such as fishing, kayaking and water skiing. Four reservoirs, created as a result of damming the river, allow for even deeper fishing waters and sailing. Two free- flowing stretches of the Missouri River near Yankton have been designated by the National Park Service as the Missouri National Recreational River, and continue to flow as nature intended, without the influence of damming.

There is no admission fee. 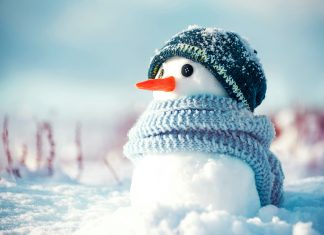 November 20, 2020
For those of us who are already singing "Let it snow!" at the top of our lungs, here are some winter wonderlands...